Boosting Your Knowledge of Artificial Intelligence while Analyzing its Crucial Role in Healthcare.

What is the first thing that comes to mind when you hear the term AI? Probably something along the lines of terrifying robots taking over the world. Maybe that’s just me?

AI, or Artificial Intelligence, has come an incredibly long way in the last 30 years. Yes, it has opened the doors to cool new robots and gadgets, but it has also drastically improved the healthcare space.

In this blog we will briefly cover:

In order for the machine to "learn", it must first process and analyze large data sets to gain information. From there, there are 2 main types of learning that AI undergoes: 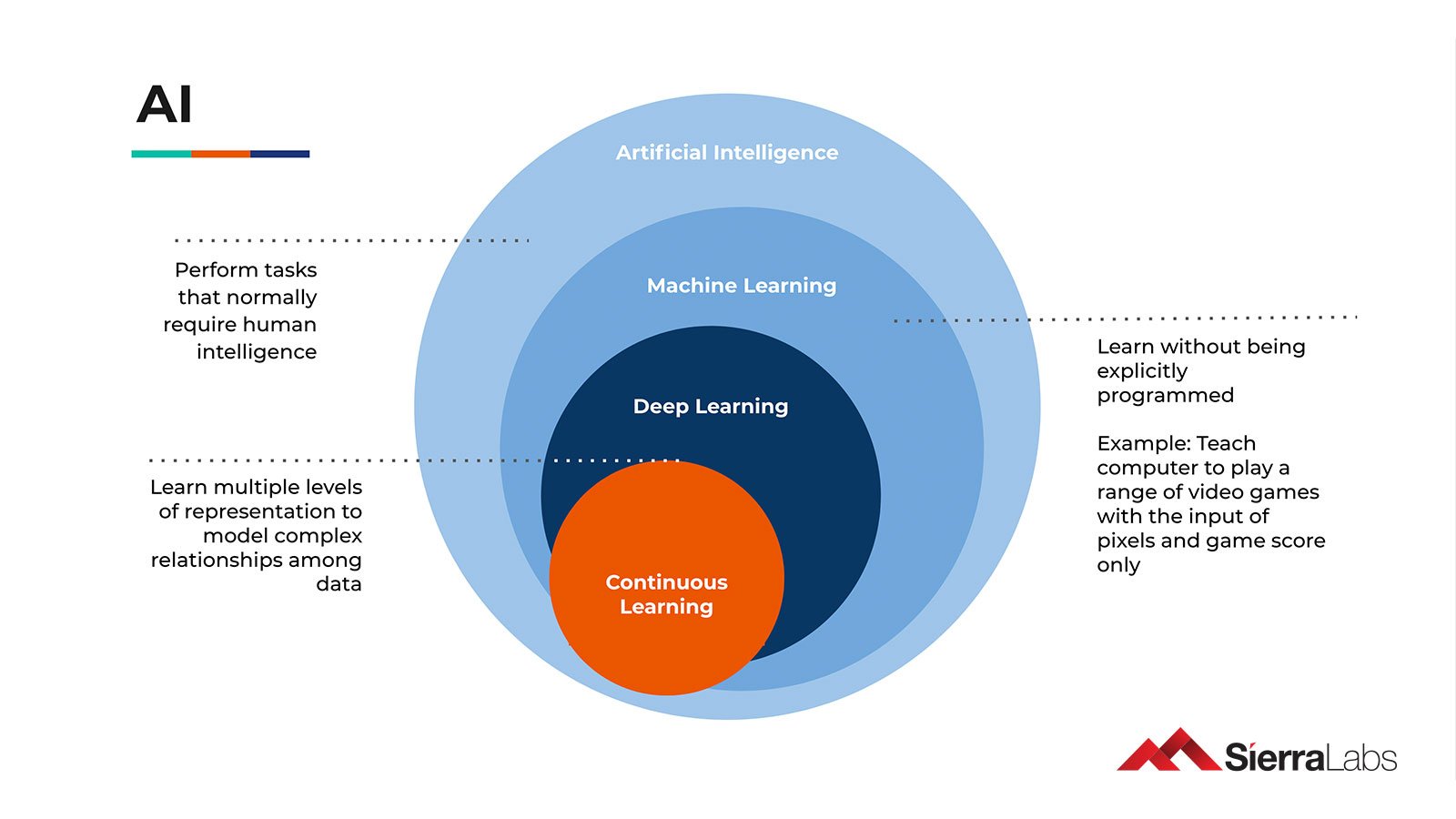 Machine learning - This involves the machine's capability to perform pattern recognition and categorization.

A simple example would be a machine playing chess. You would define the rules of the game and the roles of the chess pieces to the computers, and then the machine would be able to play the game, assessing all the different possible patterns, combinations, and outcomes of each and every move. Just think about how many more patterns it could process than the human brain could.

Now, let's think about a higher level example, such as detecting diseases in patients. Computers can process at a much faster speed than humans, as well as process much larger amounts of data patterns and combinations than the human brain can. Thus, if we are able to program machines to recognize specific signs and symptoms of diseases, they may be able to recognize the pattern far sooner than a human would.

Deep learning - This is taking machine learning a step further and is much more complex. With deep learning, machines replicate the way the human brain functions and can learn on its own, without human interference. In deep learning, the machines can connect the dots and find solutions on its own like humans do by observing and learning.

Using the same chess example previously used to describe machine learning, in deep learning, we would not define the rules of the game for the machine. Instead we would just start playing the game of chess and the machine would learn how to play based off of what it is learning along the way, much like the way a human brain would.

Neural Networks is a field of deep learning in which Neural Processing Units, or “Brain Chips”, are used in an attempt to replicate the structure and the function of the human brain. They mimic human perception and cognition and allow machines to think and learn similar to the way humans do, but at a much faster and deeper capacity.

The human brain can only process about 3-4 dimensions, while computers can process hundreds. These brain chips are extremely powerful and far surpass the capabilities of the human brain. Which brings me to my next question, how can we trust AI if we can't understand or explain the process in which it got to an answer? We will revisit questions like this further along in this blog.

The Evolution of AI

The earliest, and by far the most hilarious, attempt at AI was in 1770 with the chess "playing" machine, the Mechanical Turk. It appeared to be a machine that could play humans in the game of chess without any human interference. It was soon debunked after the discovery of a human chess master hiding in a secret compartment under the chess board, moving the pieces around himself rather than the machine doing the work.

Flash forward a couple of hundred years, and in 1996 emerged Deep Blue. This machine, unlike the Mechanical Turk hack, was a chess playing machine that functioned by machine learning. As in the machine learning example, the rules and chess pieces were defined and Deep Blue could search between 100 million and 200 million positions per second. Ultimately beating the Grand Master, Kasparov, in the final match (to be fair, it was a very close match).

Recently, in 2017, was the emergence of a deep learning machine called AlphaGo Zero. Go is a board game that is even more complex than chess. At day 0, AlphaGo Zero had no prior knowledge of the game and only knew the basic rules as an input. By day 3, AlphaGo Zero surpassed the abilities of AlphGo Lee, the version that beat world champion Lee Sedol in 4 out of 5 games in 2016. By day 21, AlphaGo Zero reached the level of AlphaGo Master, the version that defeated 60 top professionals online and world champion Ke Jie out of 3 games in 2017. And by day 40, AlphaGo Zero surpassed all other versions of AlphaGo and, arguably, became the best Go player in the world. It did this entirely from self-play, with no human intervention and using no historical data.

Look just how far AI has come in the past 23 years. At the rate that technology is developing, just think of where it will be in another 23 years!

What does AI look like in the healthcare space?

So now that we have discussed AI in detail, let's dive into its role in the healthcare space. Here is a diagram to help you visualize the different facets of AI in healthcare. 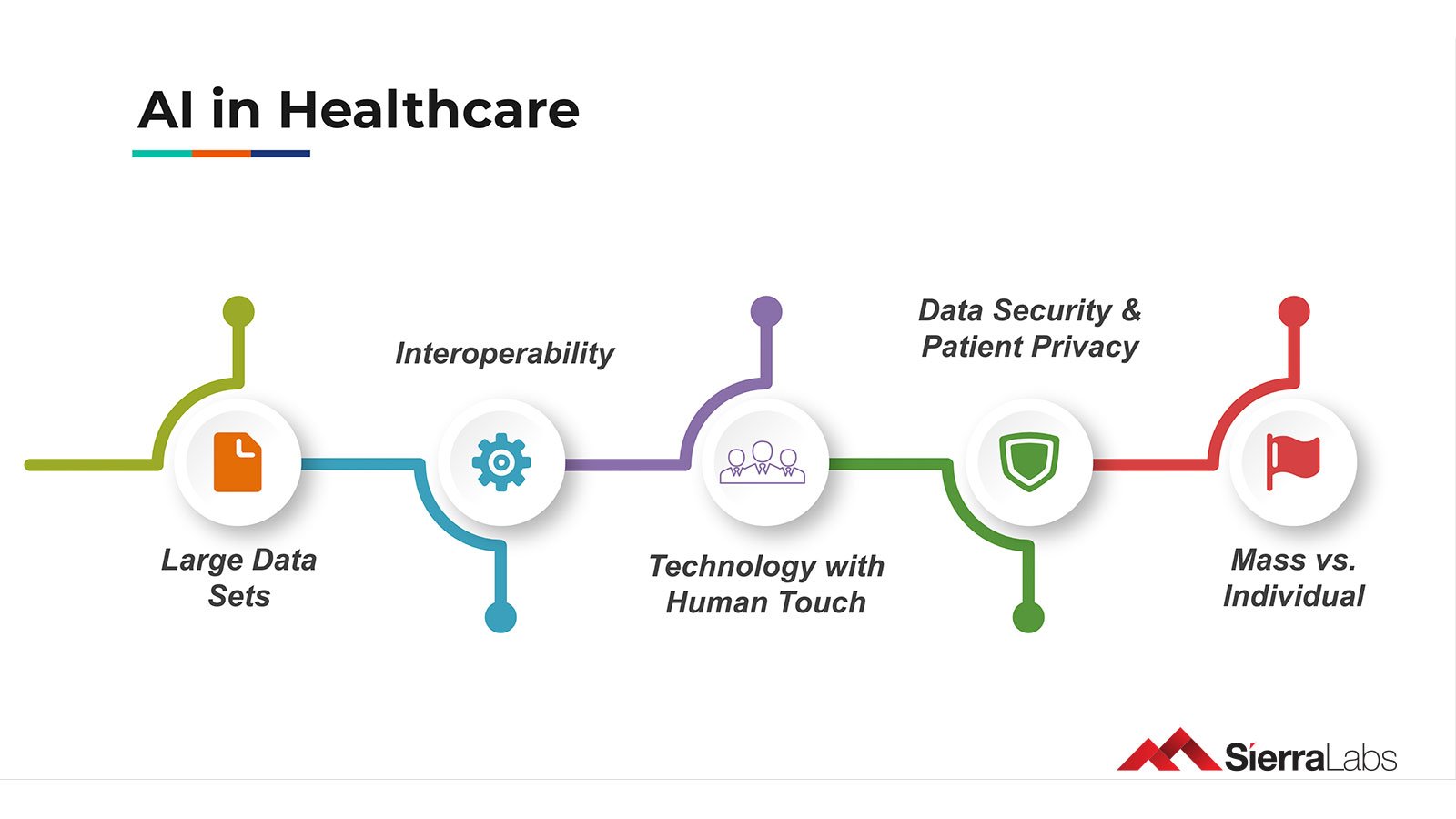 As the diagram above demonstrates, large data sets are needed in order to train the AI and for it to learn. This data should be interoperable, and thus be able to be processed throughout multiple different systems.

Technology with a human touch refers to the question we must ask ourselves: should AI ever be a decision making system, or just a decision support system? How much should the lines between human decisions and AI decisions blur together?

With large amounts of personal and private patient data, come the need for heightened data security and patient privacy methods. This is why rules and regulations around AI are present just like with any other medical device or patient care tech, to protect public safety.

And lastly, mass vs. individual is referring to the way we are developing solutions using AI. Are we using AI for personalized and individual patient solutions, or on a mass overarching scale?

What does the future of AI look like in the healthcare space?

With the rapidly increasing development of technology, AI has an extremely promising future in the healthcare space. Digital health technologies, such as AI, are a way to ease pressure on our healthcare system by allowing patients to be monitored remotely, while simultaneously empowering patients to monitor themselves independently leading to greater Scientific Wellness.

The chart below was created based off of an MIT Technology Review and predicts where AI in healthcare will be in the near future. 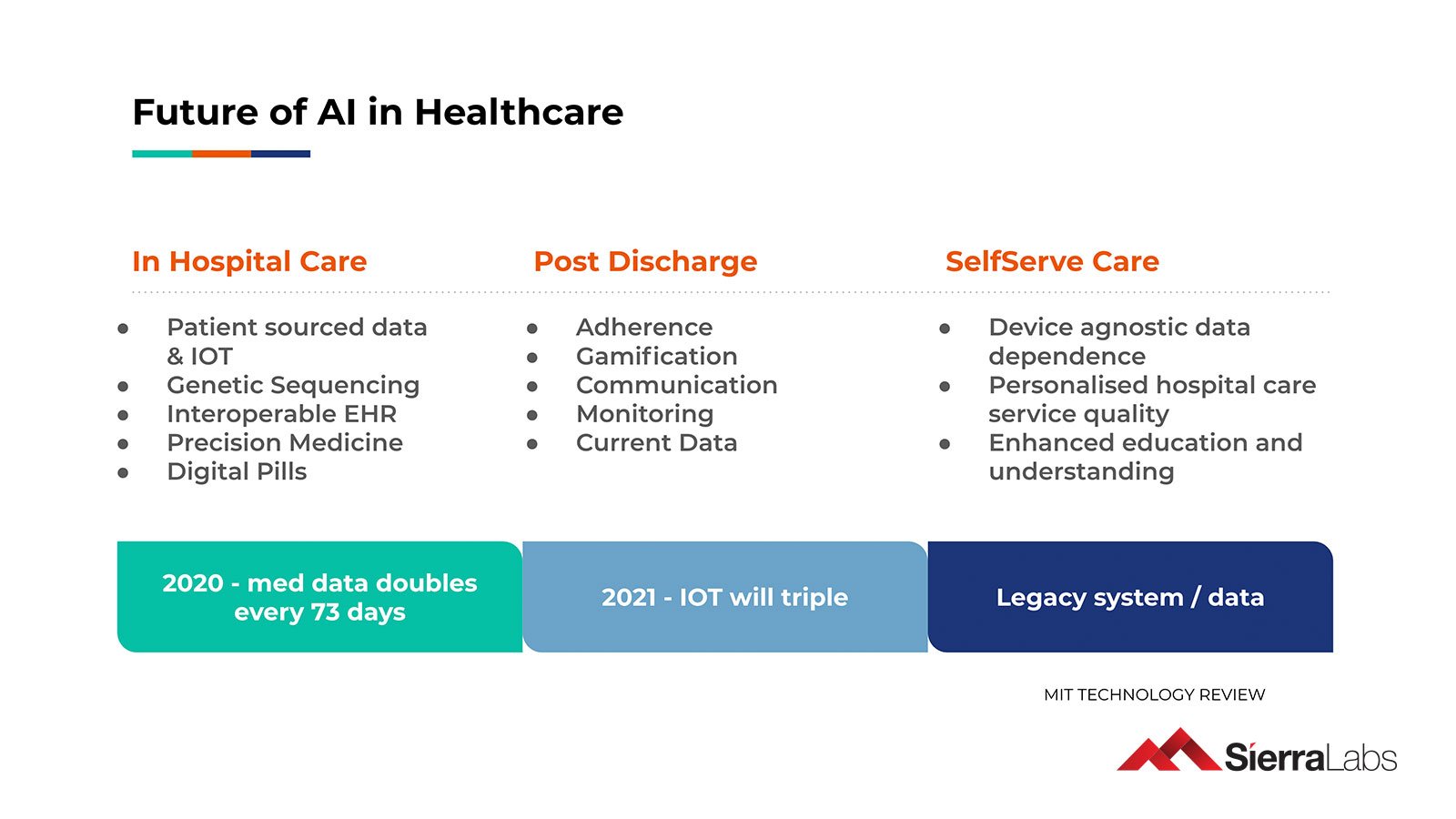 Fig. 4: Future of AI in Healthcare

How much can we truly trust AI?

AI raises many questions, but the main one is how much can we trust AI? How can you really trust a recommendation coming out of the system if it itself can’t explain it? These black box neural network systems are enormously complex, with millions of parameters in them, therefore their results are fairly unexplainable. Do we just trust the results anyways?

And what about the machine's algorithms; can they break? And if they did break, would we even know? Can we, or should we, be trusting machines to decide for us? Is it the same as machines ‘helping’ people make decisions? Should AI ever be a decision making system, or just a decision support system?

Also, what about the difference between human's natural emotional and societal factors that weigh in our decisions, versus that of a machine that uses only algorithms to make decisions? For example, if a robot used in ambulances is brought to the scene of a deadly car crash and has to decide who to save first, an elderly woman or a young girl, based solely off of an algorithm of who's more likely to die, and it chooses to save the old woman and let the child die; is that what a human would have done? And are we to say that the machine made the wrong decision?

These are all questions we should be asking ourselves, and questions that we unfortunately cannot answer in this blog. What do you think the answers to these questions are?

No seriously...we want to hear your thoughts! Let us know in a comment below!